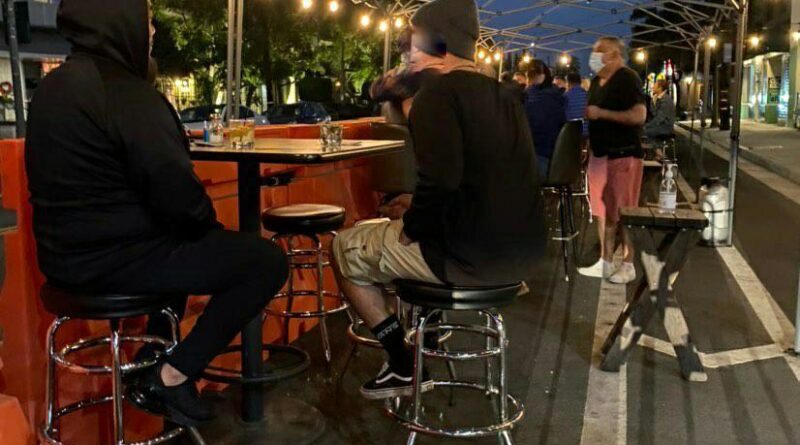 With rising Covid cases causing Long Beach City officials to implement tighter restrictions once again, not all businesses are following the order.

On Monday Nov. 23rd Mayor Robert Garcia and Kelly Colopy, Director of Health and Human Services, had a press conference addressing the Covid-19 pandemic, the impact it has had on the city of Long Beach, and how officials will go forward addressing the issue. Hospitalization has been up 248% in the last 3 weeks and on Monday the city reported 6,124 new cases.

Colopy said one of the main focuses of where this increase of cases is coming from are local bars and restaurants , which have since been ordered to cease all outdoor dining, limiting them to take-out and delivery options as of Wednesday, Nov. 25 until a minimum of three weeks.

“Well, what we really see with outdoor dining is that it is the one space of any business that is allow to be open where people do not wear their face coverings”, she said.

Colopy also stated that restaurants and bars that allow the dine-in option are one of the more riskier environments because people sit together in close proximity. Even though the city limits six people to a table, often these people aren’t from the same household. Overall the county has seen a twenty percent non-compliance rate among restaurants in terms of all of the requirements regarding covid that the municipal authorities put upon them.

“That is the key area or key reason why we are focusing on restaurants”, she added.

On Saturday Nov. 28th at 3:56pm video was sent to LB LoJo of people dining outside of Mine Shaft, a bar on Broadway and Hermosa by local resident, Lee Charley. He sent us footage and then decided to sit down with customers to see what what was really going on.

He talked to one table that said they were there to support the establishment and they thought the new shutdown was nonsense. In the video and pictures you can see people outside on the patio enjoying their Saturday evening. “It’s funny watching the LBPD drive by and do nothing”, Charley told us.

At 4:33pm the we passed by the location and it was confirmed that there was a patio full of people and even some waiting by the door.

LB LoJo decided to talk to Shannon McManus, owner of Black Bar, located just down the block on the corner of Broadway and Hermosa, about how she felt about the situation and if it was an unfair advantage to her business.

“If the city is going to shutdown businesses from doing dine in, they need to shut down all the businesses”, Shannon said. “But I also think that all bars and restaurants should be out in the streets demanding a stimulus to be passed for people and small businesses, I think that’s the bigger discussion”.

She knows the struggles small businesses are having during this pandemic.

Since March McManus’s other business, Black Bar Hollywood, has been shutdown and she said its been no walk in the park keeping the Black Bar Long Beach location open. Factors such as employees only receiving a one-time $1,200 stimulus from the federal government, causing them to quit and move out of the city and deciding not to take the PPP loans have contributed to the fallout that businesses like Black Bar are experiencing. The lack of the kind of help business owners like Shannon would like to see from government agencies on all levels may be why she doesn’t blame Mine Shaft necessarily.

“If that’s what Mine Shaft has to do, I’m not going to judge anybody for what they are doing to try to get through this”

Owners of businesses across the county, Black Bar included, are being held to the original agreements of their leases that may go back years. With this mixture of a pandemic that caused a global financial crisis, property owners that are unwilling to budge, and the only help from the government being loans that will put owners in more debt, what can businesses like the bars on Broadway do to survive?

How do you feel about the regulations? let us know in the comments below.