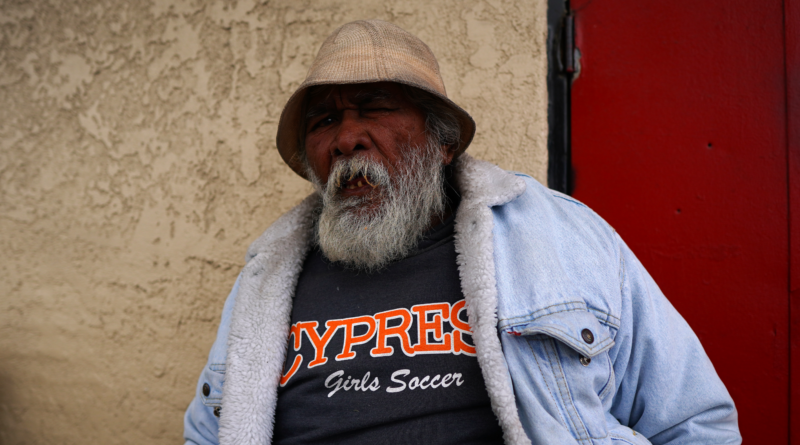 In the first story from a series on being unhoused during the pandemic, Youth Reporter Ceferino Martirez brings attention to how this crisis is being neglected.

By Ceferino Martirez, for VoiceWaves

There is a serious issue that is being neglected in Long Beach; the homelessness crisis.

Every year, I’ve walked and traveled, facing the sun while in pursuit of a paycheck, like any member of the working class. But with each year, I began to observe that more folks were living on the street — unhoused.

There is an expanding homeless population throughout Long Beach, converging within the city and its surrounding areas. So I set out to document the growing unhoused population within the city, whilst seeking more information on why this is happening.

The homelessness situation is grim; the threat that this virus has posed to the unhoused community is visually staggering — many are frail and malnourished due to living in harsh frigid conditions every night. The plight of the unhoused has been present prior to the devastating COVID-19 pandemic. Governments have advised people to stay at home, however this privilege does not exist for those in the city living shelterless. Whether they are sleeping on cold gray pavement or metallic bus benches, it cannot be denied that all unhoused people are disproportionately affected by the pandemic.

A study done by the National Library of Medicine stated that many unhoused people “lack appropriate health care“ and have nutrition-related health problems that can be addressed via “improved access to food, nutrition, and health services.”

Many of the folks I came into contact with remained apathetic or under a sense of helplessness about their current situation with the pandemic.

While most housed people may be able to afford a reusable or medical mask, many unhoused people have to choose between using what little cash they have on whether or not they will eat on a given night. And that’s if they even can as without a steady income, many of the unhoused cannot afford to buy face masks, and some have resorted to picking up used disposable masks to enter shops for food or cigarettes.

The situation that they are in often serves as a gateway to substance abuse. The National Library of Medicine uses the term “problem drinking” to describe the pattern and the harsh conditions that the unhoused face due to the long exposure living in the streets under frigid cold winds and blistering hot sidewalks.

Whether or not the city would be willing to expand the number of these shelters is still ongoing, but as it stands, the situation for the unhoused may very well get worse as more and more continue to be very exposed to infection from COVID-19, with some having gotten the virus.

There are more than 66,000 people experiencing homelessness in LA County, with at least over 1,800 in Long Beach alone, and the local population increasing by 7% prior to the pandemic.

The situation remains unsure yet critical as the city council remains unable to support the growing demand of housing, putting their focus elsewhere.

The current council appears divided. Councilmembers like Daryl Supernaw, Suzie Price, and Stacy Mungo have previously proposed lowering pandemic-induced restrictions on businesses. Others on the council like Rex Richardson have advocated for pro-tenants policies, while incoming councilmember Suely Saro claims to plan to “tackle the homelessness crisis with urgency and new ideas.”

The situation remains unclear as to whether or not the city is willing to aid the unhoused but it perhaps now lies with the people of the city to take actions and ensure that they’re not forgotten in this human rights conversation.

This story was originally published by VoiceWaves, a program that provides local youth ages 15 to 25 with the training and equipment to do journalism and storytelling in multiple mediums. Ceferino Martirez is a VoiceWaves reporter who covers protests and the housing crisis via photography. Follow him @al_vinistic on Instagram and VoiceWaves @voicewaveslb on all social media.