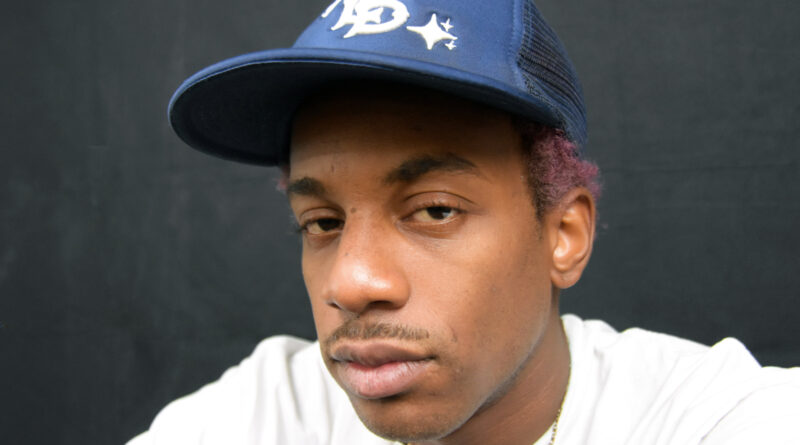 These are some of the things that inspire 23-year-old Mikem Nahmir to rap and design clothes.

Mikem has created his own brand, Death Runners, that features a wide array of style heavy shirts with a pointed message behind many of them. He has revived a lyric-driven, soulful style of music, but with a certain ferocity that can be made in no other year besides 2020.

Nahmir grew up in Northside Long Beach where violence was not only inevitable, but encouraged. Pain and tribulations are the things that pushed Nahmir to progress towards the success and love he now enjoys.

“It’s all growing pains.” Nahmir said. “You grow from what you go through.”

He always had the drive to better himself, to do more. As a kid, Mikem found that progress in getting beat up, then learning how to fight, then going back and winning. Now, he wakes up and is instantly thinking about what’s next. What’s the next motion for his profession, his next shirt, next music video, next song.

If he doesn’t have a plan for his day, he wants to do it all. After a simple morning routine of meditation, smoking and music, he’ll plunge into his day of “organized chaos”, even ignoring self-care as simple as drinking water because he says he doesn’t have the time.

Nahmir first started making music after getting released from two years in prison he was sentenced to after being tried as an adult at the age of 17. A friend of his who had recently started making beats pressured him to rap on a track. He said no. This friend didn’t let up, he played a Nas song off Illmatic that Mikem knew all the words to and told him to rap it. He did it, and then the structure of flow became clearer and this experience served as the catalyst to one of his passions.

Practicing the craft and honing his skills for months he began to get to a point where he felt comfortable. Since then he’s released five albums where his lyrics communicate messages about the industrial prison system that keeps Black and African-American people in a system of servitude, he raps about Black love, about loss and celebrating the mentors and friends that have kept him positive and focused.

“I’m doing this to promote Blackness and promote self awareness. The abolishment of racist systems in order for us to progress in this fucked up place we call America.”

One of his most dedicated projects, AmeriKKKa, which is available for $6.66 on bandcamp, is a look at the experience of a Black man in a nation of oppression that takes some inspiration from his time inside.

“ Once you get inside of those gates, the whole world that you knew is gone. You don’t have your own rules anymore, you don’t have a name anymore, you’re not yourself. If I didn’t go through the process of actually being a slave, in a different way, I wouldn’t know what I was talking about and I wouldn’t talk about it. Some people are in prison till the sand turns the glass and I wanna make the music that they’re not gonna be able to make.”

Nahmir’s lockup was only one of the ways the world tried unsuccessfully to keep him down. He was homeless earlier this year and spent many nights riding the different metro lines until they stopped, walking hidden streets from the corners of Long Beach to Azusa. Although many people either see homelessness as a distant reality for others besides themselves or a reality all too close to them, Nahmir speaks of his experiences with a sure calmness. His quiet intensity only being a testament to his voracious focus.

“I know that going nights without knowing where my next meal is coming from is what keeps my fire going.”

He describes himself with an innocent, almost childlike chuckle as “a fucking nut. Creatively crazy.” He says sometimes he still has a tendency to sometimes, “have an episode”  then clicks his tongue, “but that comes with bipolar depression.”

This polarization has almost enveloped Nahmir’s surroundings, he seems to be the parallel to the misconceptions we hold to the world. Nahmir writes songs about women in gratitude and adoration during a time where seemingly every song about a woman is about a bitch. As a person he is a symbol of peace with power while on paper he is labeled a word designed to strip a soul of all their humanity, felon. He wants victory for his people, for black people, brown people and all people of color. He is the voice of love in a year of hate, a distant light in the darkness. He wants, “peace and love and guns.”

Nahmir references Fred Hampton when I ask him how peace and guns can exist together: “We are not provokers of the peace, we are protectors of the peace. That’s why we do what we do to protect the peace”

His new shirt design, Friends, is a celebration of just that in vibrant pastels and butterflies surrounding two friends with hoods over their heads. The new song “21THREE5” is a gentle rap that aims to give respect and appreciation to the women in his life.

“People hate too much”, Nahmir says. He believes people have become jaded and detached because of this tumultuous year. The cure, he says, is to bring it back to the one thing that got us through this year, love.

At the end of our interview, Nahmir relates an answer to something he said in his song Hard Times off the album Criminal Threats, Nahmir says, “I just wanna be the voice for the voiceless, give hope to the hopeless.”