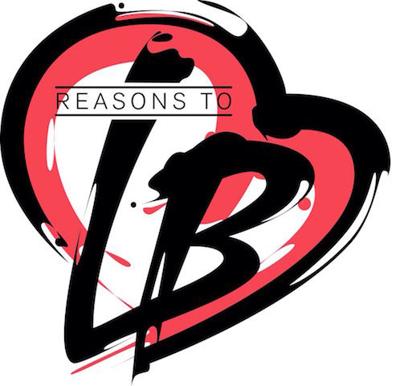 10 years ago, Long Beach resident, Wes Boyce started the hashtag, #ReasonsToLoveLongBeach, to start documenting the city. After a while, what was once a simple hashtag turned into something much bigger.

Boyce partnered with a local photographer, Ryan Scolotck to create an instagram account for Reasons To Love Long Beach. The purpose of the account was to post about local events and businesses in the city.

“I initially created this to help out my friends, I wanted to see them grow and succeed,” Boyce told LB LoJo.  “All your favorite places in town, the owners are my favorite people in town. Any place you name, I can tell you who owns it, I can tell you about the owner, the relationship I have with them. I know that not because I read some book, but because I asked them, I spent time with them.”

For the last 10 years, Boyce, originally from Illinois, organically grew over 11,000 followers as he has made the effort to support the brands and businesses of those in Long Beach, giving them exposure and sharing the unique things that gives people a reason to love Long Beach, all at no cost to anyone.

Today however, followers of Reasons to Love Long Beach won’t see Boyce as he has been locked out of the account, which as of today has been renamed from @reasonstolovelongbeach to @loveyoulongbeach.

Now in place of Boyce for the last few months out of 10 years are Nichole East, who claims she is from New Haven, CT; Portland, OR; and Brooklyn, NY and Surya Pinto, from Lancaster, CA, the catalysts who have decided to overthrow Boyce.

The former friends, Boyce and East, first met on Tinder and dated for a while before their relationship eventually ended in a breakup.

“Because of the way Long Beach is, we had mutual friends and there was an event where I knew I was going to see her,” Boyce said. He reached out to East, and they mended things.

About two years ago, East asked Boyce if she could join the page. She wanted to create a segment on the page where she taught the history of different parts of Long Beach called “Let’s Learn Some Shit”, which was initially well received from the community and Wes.

According to Boyce, East wanted to be on the page to give herself a good name and a reputation for when she was planning to run for city council in a few years.

Boyce had previously run the page while out of Long Beach prior to this, running the page when he was in Chicago and even while he was in Europe. This year with the effects of the pandemic, things were different.

As the pandemic began earlier this year, East eventually started taking more control over the account, as the nightlife and after hour events that Boyce had promoted for several years became non-existent due to restrictions and closures due to COVID.

Boyce eventually had to relocate and leave Long Beach during the pandemic, garnering East to take even more control over the page.

In an interview with the LB LoJo, Boyce expressed that he wanted to keep the page as a positive thing in Long Beach. He didn’t want to attack anyone or spill dirt on anybody in the city. “It was Reasons to Love Long Beach, I wanted to keep it positive,” Boyce said.

But as the Black Lives Matter movement began to gain traction in the early summer of 2020, East began implementing different plans for the page. She began posting political content and started calling out city council. This led to a massive jump in followers on the page. Taking Reasons To Love Long Beach from 11k to 16k in a short span of time.

East, and her new business partner who she brought on to co-run the page, Suyra Pinto, launched a website to begin capitalizing off of the community Wes used to help for free, and began initiating a marketing business out of it, making more money off the brand that Boyce created and worked years to maintain.

On the first night of the website launch, the business raised $1,000. East offered 20% of that to Boyce.

In an interview with the LB LoJo, East said, “We worked hard to build the platform, you have to be here for this. He (Boyce) thinks he’s entitled to what we earn when he’s not even here,” East said.

“As soon as she [Nichole] realized there was money to be had from what I made, she started pushing to sell things really hard,” Boyce stated as to the reason why things are where they’re at now.

According to Boyce, for the last 3 weeks, East and Pinto have been arguing with him about the money being raised and who gets what. Boyce stated that he felt it was getting increasingly harder to work with East and Pinto, who wouldn’t listen to his requests or communicate with Boyce when he wanted something done.

Most recently, Boyce called East and asked if she could use his account to promote his friend’s business (the original goal of his account) and East refused his request. East and Pinto have recently been charging businesses upwards of $250 for promotions and marketing content.

On Sunday, December 13,  the feud reached its tipping point. East and Pinto locked Boyce out of his account and changed the passwords and added two factor authentication, effectively making it impossible for him to gain access to his own account.

East and Pinto pointed out that they spoke to a lawyer about the decision. “We consulted a third party and they determined what the business was worth.” The third party consultant that they hired determined that the Instagram page was worth $1,000.

“She called me and said ‘You have no other option, you can either take this money or fuck off’,” Boyce said while recalling his phone call with East.

East and Pinto gave him two options when it came to the business:

Take the money they’re offering to him,

Not take the money and lose the page and business anyway.

Shortly after the phone call, East and Pinto took to Instagram and rebranded the Reasons To Love Long Beach page to Love You Long Beach.

“It doesn’t make sense why they would change the name when the name already had 30,000 hashtags,” Boyce said.

The move to rebrand the page, accompanied with an Instagram story video of East and Pinto gleefully announcing the new name, made it clear that a separation had occurred.

East and Pinto expressed that they have no regrets and expect no repercussions from the community as they conducted the ‘separation’  through a third party.

“We have no regrets and are extremely satisfied and happy with the results,” East said. “We’re just excited to see all the growth and all the hard work we’ve been doing for the past 7-8 months.”

Boyce was crushed to hear that news. “They don’t understand Long Beach,” Boyce said “Long Beach doesn’t play. You can silence me, but you can’t silence my friends.”

Boyce is still unsure of what exactly to do. As for now, he created a new Reasons To Love Long Beach Instagram and is planning to pursue legal action over the logos he designed and his intellectual property.

As Wes Boyce restarts his Instagram page from practically ground zero, local residents have to ask themselves, are we just a number on an Instagram page that can be bought or an actual community that should be earned.

Editor’s Note: On Monday, Dec. 15, at 9:57 a.m. Nichole East sent the writer of the article Nick Eismann a text message stating that he didn’t “fact check”.

After reviewing a voice recording, it was found that East stated she was from “New Haven” located in Connecticut, which the editor updated the article to reflect that and addressed on the LB LoJo platform. The recording has been attached and transcribed below.

Surya Pinto: “You came from (New) Jersey? Do you want to say it?”

On Monday evening, the Love You Long Beach Instagram posted a response denouncing the content in our article. The LB LoJo has proof submitted by local community members and gathered receipts that support LB LoJo’s facts in the article are indeed true and that East’s claims are false.

Addressed by Nichole East, the statement claims that their IG stories have been free and at no charge to the business or people they interview and claiming that anyone saying they charge is mistaken. They also claim that Nichole East is from Brooklyn, NY. A local business owner who wants to remain anonymous notified the LB LoJo that East would charge him $250 a month to promote their small business, evidence is provided below.

Also in regards to another slide where East claims the “offer amount was greatly understated”, our writer Nick Eismann stated in the article that East and Pinto’s third party consultant said that the INSTAGRAM page was worth $1,000. East also claimed that they will “help small businesses and support our community”, however when Wes Boyce asked Nichole to promote a small business, she refused to do so. East also stated she would “delete and block outlandish and inappropriate accounts”, she deleted and block Nick Eismann after professionally addressing her “fact check” post that denounced his article and he presented the facts once again and he was blocked by Love You Long Beach, therefore removing his response from view..

The LB LoJo stands by this article and the journalistic integrity of our writer Nick Eismann and has recordings and evidence supporting that this piece is 100% facts.

16 thoughts on “What’s the Real Reason: The new custody battle over a well known community page”