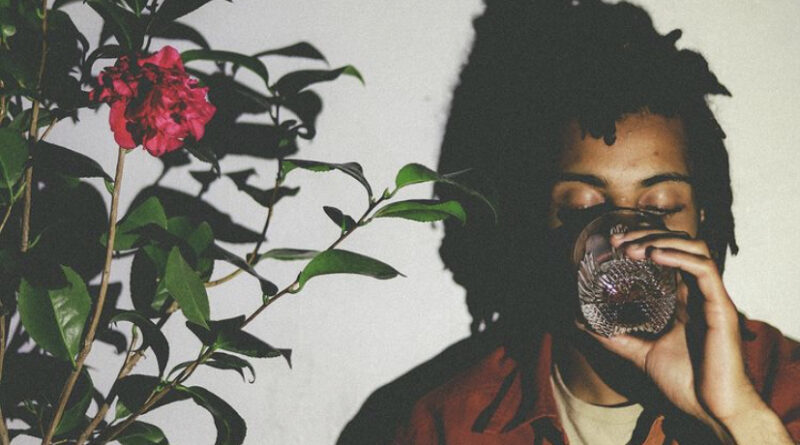 An Interview with Big World!
By Jasmine Navarro (Them/They)

It is a mild late December afternoon when Big World! and I agree to meet at his home in the Wrigley area of Long Beach for our (socially distanced) interview. We head to the backyard, where murals he has painted over the years casually coexist with lush, tropical trees. Previously the backdrop to some of Long Beach’s best curated underground art shows, the yard functions once again as a space for the artist and his family to relax.

Big World!, born Noah Xavier Frazier and formerly known as Big Ghost Frazier, has released three albums, I Tend to Get Restless (2017), HUH? (2019), and Silver Satin (2020) as well as a handful of singles. He has more music on SoundCloud, and pre-COVID, would perform regularly in Long Beach. Well rounded, affable, and wise beyond his years, Frazier is not only a rapper, but a poet, painter, producer, boyfriend, and father.

“I’ve been rapping all my life, I think all little Black boys have,” Frazier recalls once we sit down. “…I really started getting into writing rhymes when I was in seventh grade… I started [making beats] in high school.” He began producing beats before he ever started recording himself, and has started making them again recently, after a few years off.

Frazier’s foray into the world of rap came during a pivotal moment on the school bus in middle school, when a friend showed him Immortal Technique’s “Dance With the Devil”. Up until that point, he’d mostly only listened to Old Skool CDs his father had given him— Digable Planets, Arrested Development, KRS-one, Special Ed—but his library was limited because his mother “…was strict about what [he] was hearing back then.” Newly  inspired by this world of provocative lyrics and enchanting beats, a seventh grade Frazier dug deeper into the world of rap and began to write his own unapologetic rhymes.

As Frazier began listening to more rap, he discovered one of his biggest influences, Brother Ali, whom he describes as “just as prolific with his words,” but not quite as provocative as the other songs he’d started discovering. “…It was just as deep [of] music, but it was more my vibe,” he remembers. The inspiration is clear: while Big World! explores political and deeply personal themes in his music, his lyrics, like Ali’s, are thoughtful and poetic—even an angrier song like BABYLON (available on SoundCloud), which criticizes the state of the world, calls out police brutality, and laments his feeling of diaspora as an African-American, is melodic and well-thought out (“America don’t love me, Africa don’t want me…”). While his newer music under Big World! takes a different direction in terms of sound and production, he maintains his critical lens and poetic flow.

While rapping might be one of his biggest passions, Frazier describes painting as his “first love”. Inspired in fourth grade after being gifted a paint set by his grandmother, Frazier’s initial dream was to be a professional painter. However, it was the early 2000s and difficult for a young Black boy to find representation in the fine arts. He took up an interest in graffiti artists like Montana and The Seventh Letter. “…You need to see examples of yourself in the world, ‘cause it helps,” he asserts. “You know, if I saw more Black biologists… like, now I’m getting into more natural [stuff], so I feel like if I went back to school I’d go back for agriculture or biology or something. I never really felt that way [before], but I feel like I never really had examples. Nobody really did that around me. Now that I’m getting into it myself I’m like, ‘this is really fun!’”

As an adult, Frazier has come a long way from being that young, uncertain boy trying to find his footing. He was commissioned for a mural on Downtown Long Beach’s Kress Market during one of the Black Lives Matter protests in June. The image he chose to recreate was a provocative but poignant image of a Black woman holding a knife to the neck of a police officer, whose gun is drawn at a young Black man on the floor. The mural was removed almost immediately, most likely due to business reasons. Frazier chose this image to recreate because to him, it portrayed “a mother protecting her young” from police violence, an especially relevant message during a year in which 226 African-Americans have been killed by police. 2020 was also the year Frazier became a father. Being a parent has changed his perspective because, “…you have this person now that is undeniably the most important thing in the world… there’s nothing that you really felt that way about until you have a kid.”

As Big World! continues to grow and mature, so does his music. Frazier is unique as a rapper, not only because of his well-rounded tastes in music (he mentioned an affinity for Neil Young), but also because of his insightful outlook on the world and his plethora of artistic passions. And so, Big World! has been working consistently in studios for the first time, as opposed to doing everything at home. He looks forward to his new creative endeavors and is always striving to better himself. His intentions with his mediums are clear. “Ideally with my music if I can make something that makes you dance, that’s the ultimate goal for me,” he declares. “… As far as painting, I’ve still got a long way to go.”

You can find his most recent album, Silver Satin here.
You can stream his newest single, “Roudy Frisky” here.


Jasmine Navarro is a 23-year-old Afro-Latinx musician and writer from Long Beach, California. 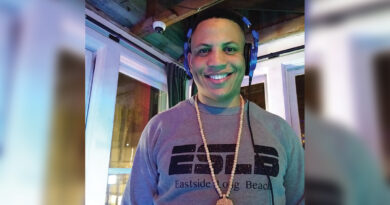 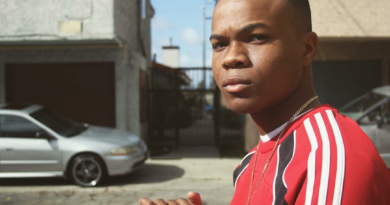