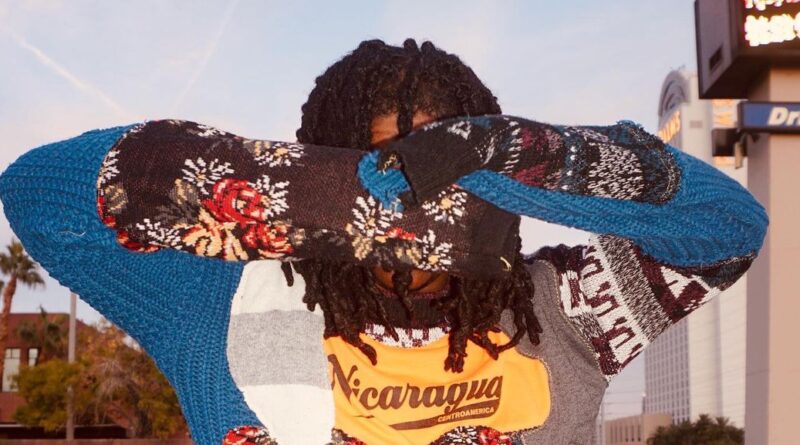 Hustle. Ability. Confidence. These are the words that come to mind when describing the persona such as Andre Illmatik. Born in Los Angeles, CA, he has a steady connection to scenes in Las Vegas, Nevada and back that he’s cultivated since his early teenage years. With that, Andre gained experiences and skills that made him a real artist in the true sense of the word. Now as a resident of Long Beach, CA he plans to make his presence known.

“I stepped off the porch when I was probably like, thirteen, fourteen”, Dre tells me as he holds his daughter in his arms. “I was raised by a single mother so I was ALWAYS on the hustle”.

He recalls how he started to sell pixie sticks in the parking lots of Walmart and movie theaters. “Helping moms out”, he says, “or just even being able to pay for my own things was important cuhs we, you know, … I had to go get it”.

As we sit on the Eastside of Long Beach where the now disbanded “The Daily Diddi” podcast was recorded, Illmatik lays it all out for me. The hustle quickly evolved after his first time smoking weed at this age. After that experience he went from selling candy to selling cannabis. This is all before he turned 14 and moved to Las Vegas. There Andre evolved not only with the weed industry reaching legitimate means, he also evolved in his talents. Everything from music, art, and fashion, Dre has his own style that is more than just a look or a flow, it’s an aura.

Now at the age of 25, He has his own network of movers and shakers all across the So-Cal region stretching into Nevada and I asked Dre, “How did you get to where you are now?”

“Man, It’s called ‘pursuing my personal legend’”, he says. “Not having that fear, going out and pushing myself to be that person I want to be. Literally being straightforward, like when I ain’t never gave up”.

He says this philosophy helped him gain footing in Long Beach as a new resident. “When I first moved to Long Beach I didn’t even have a place to stay. That didn’t stop me from, you know, talking to everyone I met and letting them know who I am. Even though I was going through the fucked up shit I was going through, I’m a businessman, I’m an entrepreneur, this is what I want to do”.

The first year for him wasn’t exactly comfortable and for someone in his predicament it would be easier to pack up and leave completely. Instead, Illmatik stayed up countless nights supporting different scenes and navigating with everyone from the skaters at Bixby Park and the Crips in various areas consolidating brotherly love to meshing with other creative scenes like Grn+Gld and the various characters that frequented events like Fight Club and even the treacherous 4th street bar scene.

Illmatik believes it’s important to stay away from negativity at all costs and to distance yourself from unjust people to remain in the mindset one needs to accomplish their goals, especially when you’re making your own foundation. Andre is one of the most respectful/respectable people you will ever meet and is a shining example of how a person should navigate the true essence of a city. Illmatik makes it a point to be a supportive figure in every scene he interacts with before partaking in the benefits of whatever new friend group he encounters, and even though this might sound sad to say,  that’s what makes him unique.

After two years of being in LB Andre Illmatik has soaked up the game and became it. With the launch of his new clothing line RiveRRR Phoenix and his music still hypnotic as ever, Andre plans to come out of this pandemic on top.